When I first saw the link for nominations to attend the inaugural White House Summit on the United State of Women, I was intrigued. This was something that fell right into the cross-section of my interests: politics, feminism, and The White House. So I opened the link in a new tab and continued down my Facebook feed. It wasn’t until later that night that I returned to the tab and searched for what a nomination would entail and require. When I read that I could self-nominate, I didn’t think twice about it. I wrote out an essay, gathered a portfolio of writings and activities, and sent them off that night.

This was back in March; by the time May arrived, I had forgotten all about it. But when I opened my inbox a few weeks ago, I was greeted with this: 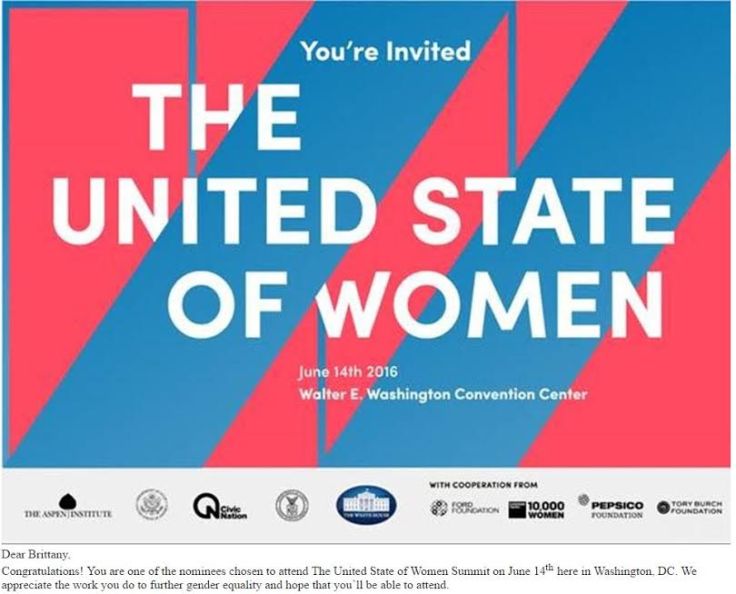 I was elated. After working out finances with Luke and scheduling time off at work, I started telling people the great news. Everyone of course has been congratulatory and supportive and I am still grinning about it. But some people were caught off-guard when I mentioned I self-nominated. A few asked if it was awkward, while others laughed and asked if I was serious. I was.

Now, everyone who was startled is steadfastly supportive. The shock wasn’t from a place of judgement or derision, but more surprise that I bluntly acknowledged my self-nomination. And if I am being completely honest, I understand where the questions and surprise stem from. It was awkward to write about myself. Though I did not hesitate about submitting my nomination, I spent the first twenty minutes trying to decide whether to use first-person or third-person (I opted for first- it made it more passionate). But after I overcame the self-consciousness, I was satisfied with my final submission.

I refuse to feel bad or ashamed for self-nominating. Quite frankly, I wish more people would self-nominate, especially women. Too often I have heard female colleagues and peers apologize before presenting their ideas or asking permission for their voices to be heard. Women should not have to apologize for vocalizing our existence as living, thinking persons. I take pride in the work I do and there should be no problem with that. Men are listed and praised as innovators, while women are just relegated to dreamers. It is time for that to change.

If I had a penny for every time I received a variation of “You think you are just entitled because you are a woman,” I might have enough for my salary to equal that of a white male. Directing your own future isn’t entitlement; it is questioning why you still have to work twice as hard to stand out amongst male colleagues; it is refusing to stand by and watch your work be dismissed, not due to its content but rather your gender; it is finding voices that have been silenced far too long. The only entitlement I seek is the guarantee of equality.